Homepage > MONSTERS IN OUR MIDST: The choice between cooperation and resistance

MONSTERS IN OUR MIDST: The choice between cooperation and resistance

I am writing while sitting on the train between Hässleholm and Växjö. It is a wet and chilly day, outside a window gushed by rain Småland´s countryside flashes by; silent lakes, forest clearings and meadows veiled in light mist. I just finished reading a novella The Black Spider, written in 1842 by a Swiss priest named Jeremias Gotthelf . A remarkable book. Even though it was written some decades after the fading away of Romanticism it is some kind of gothic fantasy, reminding me of novels like The Monk and Melmoth, the Wanderer, or German fairy tales like Undine.

Throughout the years I have devoured several Gothic tales beginning with Poe's strange stories that grabbed me after I found them in Hässleholm´s now demolished, old communal library. The origins of my obsession with books is to be found in that treasure-house with its creaking wooden floors and the specific fragrance of books bound in the red and blue hardbacks of the Swedish Library Service.

The Black Spider is somewhat more thought provoking than gothic horror stories generally are, with the possible exception of the extraordinary Frankenstein, or the new Prometheus, which as well as The Black Spinder may be considered as a prophetic work of art, telling us something about “The Shape of Things to Come”.

Gotthelfs language is easy read and quite effective. After a fairly slow start depicting a baptism party within a pastoral paradise tucked away somewhere in the Swiss Alps the writing gains steam when the author brings us into a feverish retelling of a medieval legend where a gloomy and despotic warlord lurking in a mighty stone castle torments his peasantry with whimsical tyranny and self-centered callousness. To avoid destroying the pleasure for prospective readers I will not retell the story, only point out what caught my attention. 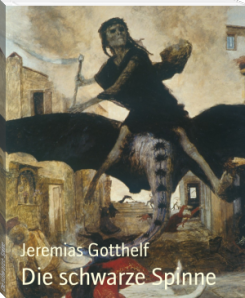 The ruthless knight of the high castle gets a stupid idea and by threatening his wretched underlings with undeserved torments he forces them to deal with the impossible task of realizing it. In their despair the peasants accept a deal with the Devil, brokered by an unconstrained and unconventional woman. The story revolves around an understanding that even it it may seem to be justified and based on good reasons any deal with representatives of evil and immorality inexorably ends up in disaster. Even honourable and exceptionally courageous persons who against all odds dare to take up arms against evil and refuse to submit to tyranny, bite the dust and die. The calamity that torments the Alpine community is an incarnation of evil in the shape of a monstrous spider, which is born in its midst. Occasionally  the despicable parasite  produces a vast horde of offspring, but generally the fiend acts alone and seems to be present everywhere. This coldly calculating predator out of Hell and the torpor it produces among its victims reminds me of how the German people seventy-five years after the Swiss priest's story ended up enduring or supporting the Nazi madness, most citizens being unable to confront the evil that was poisoning themselves and their entire society .

Once it had been brought into life the spider could not be killed, the only way to incapacitate it was to grab it and hurl it into a cavity carved into a window ledge and secure it with a plug sprinkled with holy water. A process that meant a secure death to anyone who succeeded in realizing such an heroic act. Even if the spider´s imprisonment was accomplished, every man and women in the Alpine valley continued to be aware the fearsome creature´s ominous presence. In spite of its lethal aggressiveness someone always succumbed to an urge to release it, either in foolishness, or because s/he believed it could serve her/his purposes in one way or another, or a relentless fool might simply act on a mad desire to challenge the unknown.

Of course, there can be no other connection between Gotthelf´s book and a distant future than the fact that his novella was written in German and the author was gifted with a knowledge of human nature, meaning that he was able to describe how feelings of guilt and mass hysteria can clutch any society in an iron grip and subdue anyone into complicity, apathy, desperation or death.

When I finished reading the horrendous tale, I came to think of Franz von Stucks painting The Wild Hunt, which I many years ago was confronted with in the Lehnbachhaus museum in Munich, a town where I also visited von Stucks´s delightfully kitschy house. Von Stuck is typical of the heavy, slightly musty but equally magnificent turn of the century art which most superb representative was the Swiss Arnold Böcklin. Von Stuck was, along with the neo-classical Anselm Feuerbach, Hitler's favorite painter. It was in 1889, the same year that Adolf Hitler was born, that von Stuck painted The Wild Hunt which depict how the enraged  old Teutonic deity Wotan rushes forward on his horse, followed by what seems to be a horde of demented demons. Already in Hitler's time, people saw in the mustache adorned Wotan a depiction of the demonic little Austrian´s features. Hitler, who for many years resided in Munich and was keenly interested in art and a great fan of von Stuck, must have seen the painting, but we do not know if he recognized any similarities between himself and the painting´s Wotan. If that had been the case, it could not have been especially flattering for the dictator to recognize himself as the leader of a bunch of mad demons. 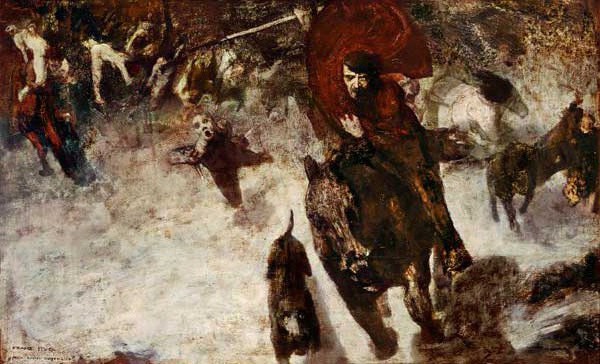 With leaders like Hitler, Goebbles and not least the repulsive Himmler and their obnoxious entourage of SA and SS men it was indeed as if the old German legends about a roaming devil and his demon entourage had turned into reality. Like Wotan´s horde on von Stuck´s painting the Nazis hurled themselves on Europe, spreading fear and loathing wherever they appeared. How intellectuals and apparently normal persons could deal with such people also seemed to be  an extension into reality of Grimm's most horrifying fairy tales about Faustian bargains, a tradition that gave birth to an entire genre of literature with highlights like Goethe's Faust, Camisso´s Peter Schelemihl , Hoffmann´s The Devil´s Elixir and Carl Maria von Weber's opera Der Freischütz  (The Marksman) whose devil and rural environment remind me of The Black Spider. Thomas Mann was inspired by this tradition. By the way, this great author admired The Black Spider and praised it as a work of genius "like no other piece of world literature”. During his exile in the United States, Mann wrote the novel Doctor Faustus, in which he linked the German legends about Faustian bargains with current intellectuals' betrayal and capitulation to dubious ideologies that had paved the way for the Nazi rule. Thomas Mann's son Klaus described simultaneously in his novel Mephisto how an artist, inspired by the great actor Gustaf  Gründgens, sold his soul and dignity to Hitler and the Nazis.

When I googled The Wild Hunt, I recalled another painting, this time by Fransisco Goya which also appears to depict a dictator as demented demon. Plagued by anxiety and deafness Goya covered the walls of his home with horror scenes populated by witches, demons and idiots. On one of these paintings, called A Pilgrimage to San Isidro, within a group of nasty looking characters who seem to be on their way home from a drinking binge, I recognize Napoleon, the man who plunged Spain into the living hell that Goya depicted in his famous etching series of war disasters. The man I believe to be Napoleon has the same hollow-eyed, mad stare as the one-eyed Wotan on Stuck´s painting. He even has Hitler´s characteristic fringe of hair, though turned to the other side . 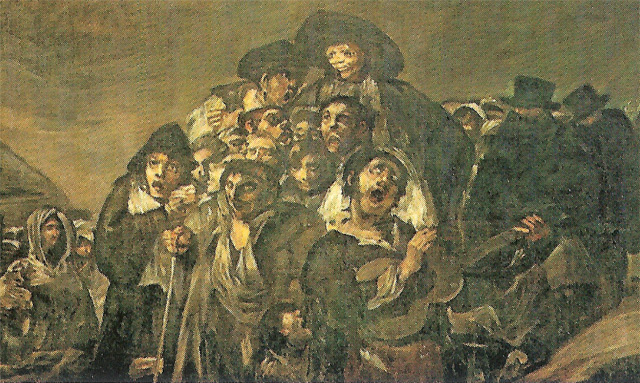 We recognize the monster, even if he is in the middle of a throng of people. As the concentration camp survivor Primo Levi wrote “There are monsters, but they are too few to be a real danger, much more dangerous are the normal human beings”. He is probably right, but I also believe that normal people become dangerous if poisoned by the few monsters that are to be found in our midst, clearly visible, like the black spider in Gotthelf´s tale, the question is if we dare to confront any of them.