Away on yearning flames, I flew.

The light ash spun through the air

And sank - so bright and slow

Do not tread too hard ‒ my heart is still alive.

I do not understand a word of Persian and can accordingly not determine whether a Swedish poet´s translation of this poem is correct interpretation of Hafiz´ original. Furthermore, it is probably made even more inaccurate by my clumsy transformation of Swedish into English. The Swedish poet, Erik Blomberg, did not know any Persian either and translated the poem from a German interpretation made by a certain Hans Jürgen Bethge, whose command of Farsi in a German reference book is somewhat cryptically described as: “although he had not mastered Chinese, Arabic, Persian, or any other oriental languages, he knew them.”

Possibly, the text might not even be a proper love poem, maybe it is some kind of religious hymn. I have not the faintest idea, but despite its shortcomings for me it remains a poem of love, or even passion, and it has been so ever since I first read it some fifty years ago. Over the years I have read several other pomes written by Hafiz, mainly in English and German versions, and I thus assume that Hafiz, or more correctly ‒ Shams al-Din Muhammad Hafiz Shiraz, must have been one of those great writers who knew how to write about love between woman and man, thus illuminating world literature and providing bewildered lovers with points of reference when they have been struck by that mighty, tumultuous sensation called love. 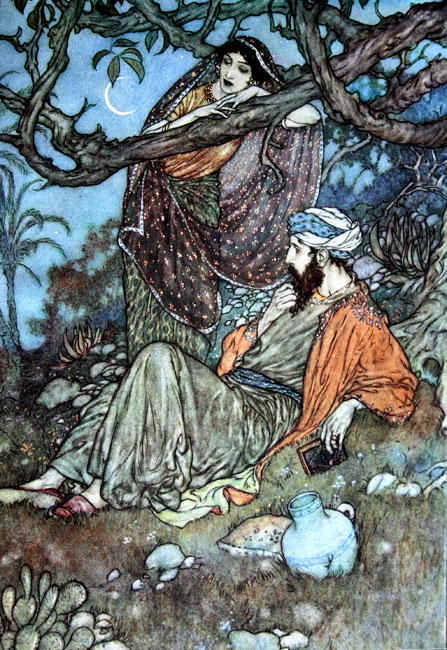 All around the world we find a wealth of poems, which with tenderness and passion express love, longing and wish fulfillment. And yes ‒ many of them are actually written by men. Consummate love songs of Petrarch and Shakespeare are intermingled with popular tunes, like this one by Sigmund Romberg:

You came at last
Love had its day
That day is past
You've gone away
This aching heart of mine is singing
Lover come back to me.

In those days when I worked daily with gender equality issues, I read and listened to one story after another about men's boundless cruelty towards women; their abuse of power, contempt for women and weakness, their drunkenness and sadism. About men's obsession with brutal sex and machismo, about their fears for demonstrating affection or love. I learned that men are devout admirers of warriors, playboys and power-drunk kings and leaders. Offensive role models and ideologies were presented as guiding principles for the world's men. All of this is of course fact and reality, I don´t deny it, on the contrary and yet ... the coin has another side as well, even if that side in some venues might appear as being just distant as the dark side of the moon.

Jesus, St. Francis and Gandhi were men. It cannot be denied that in all cultures we find abusers of girls and women, but like birds in the jungle we might also find poets, who with insight and sensitively praise love between woman and man. All of us are familiar with some moving song about love and tenderness, written by a man. By stating this I do not wish to reduce men's wickedness, or praise masculinity, only point to the fact that men have been capable of describing love in an insightful manner, like this song from the movie Casablanca sung to Ingrid Bergman and Humphrey Bogart, banal for sure, but to me it still sounds honest and true and it has at least proved to be memorable:

Moonlight and love songs
Never out of date.
Hearts full of passion
Jealousy and hate.
Woman needs man
And man must have his mate
That no one can deny.

It's still the same old story
A fight for love and glory
A case of do or die.
The world will always welcome lovers
As time goes by.

During the years I worked with gender equality within the UN system, as well as within bilateral and non-governmental organizations, I rarely heard ‒ no, never ‒ anyone talking seriously about love between woman and man. Never were words like “love” or “compassion” even mentioned during any of those countless meetings and gatherings I have attended.

If I ever tried to mention such words in speeches or writing, and I really tried to do just that on some occasions, they were immediately censored and obliterated. Consoling, loving words were for some strange reason considered to be “embarrassing”, “falsely emotional”, “disparaging” or “overly sentimental”. I dare say that sincere, positive and emphatic emotions are taboo within the sphere of international cooperation, while false sentimentality and fighting spirit are generally welcomed. I wonder why it is like that? Do we not like love? Do we have no need for positive role models in the gender equality struggle, except for empowered and energized women? Why is there all this talk about struggle and combat, instead of peace, negotiation and compromise? We are constantly fighting for women's rights and even for peace.

Nowadays, we hear a lot about love between man and man, about love between woman and woman. LGBT has become part of the gender equality agenda and for me this is quite OK. Nevertheless, based on my own experiences, it seems to me that any official talk about love between woman and man is considered to be quite embarrassing. Is it not politically correct to talk about that kind of love? I honestly do not understand why it has become like that. In fact, in any ongoing debate about gender equality we seldom hear words like “love” ‒ not in the sense of sexual satisfaction, but as a general, overarching concept ‒ nor “tenderness” or “compassion”. I hope that it would not be so embarrassing to talk about love.

And maybe it even would not be so bad to point out that there are indeed good men. Positive male role models exist, as well as positive male roles, even within that “male” sphere that is depicted as chauvinistic, violent and callous, even there I assume the words of that great poet of comfort, love and passion, Leonard Cohen, sound true:

Ring the bells that still can ring

There is a crack, a crack in everything

One of mine and my youngest daughter’s pleasures is to visit IKEA, a strange place where I cannot avoid being fascinated by the small, decorated rooms. They make me think of reconstructions of antique environments which are to be found in museums. The only difference is that at IKEA people move...