My blog is among other things a Memory Palace  where I store whatever fascinates me. What I like to delve into; thoughts and opinions I like to share and above all it serves as an appendix to my often confused, forgetful and disordered brain. I am a hoarder; a collector of books, CD:s and above all art cards. I have been collecting them since I was seven or maybe eight years and I now have several thousands of them. My art card collection is one of the few things I keep in meticulous order. I often take out the cards from their boxes, watching and thinking about them, probably my method of transcendental meditation.

I thought of taking a break from my occasionally time-consuming and far too engaging research for and writing of blog entries and do what I often do – look at some of my favourite pictures and this time store them here, so you as well – my dear reader, might enjoy them. So let us take a walk through art history and contemplate some oddities as well as beauty I have fallen for.

Inside the dark interior of a cave in Altamira a bison takes a leap. Who was the genius who 15,000 years ago painted this masterpiece?

Nefertite and Akhenaten walk in their garden 1,330 BCE. She reminds me of someone I know.

Inside a kylix, a wine drinking cup, the master Exekias did in 535 BCE paint a dream vision of the Mediterranean Sea: From Dionysios’s ship sprouts a vine, heavy with grapes, while the god under a swelling sail leisurely travels forth among frolicking dolphins.

Caught in a dance within a tomb in Tarquinia, 470 BCE.

Many years ago, I stood during an exhibition in Rome face to face with inhabitants of the Egyptian-Greek town of Fayum.

A tired, torn, old boxer found in the ruins of the Diocletian baths in Rome, where he had been sitting for 2,300 years

waiting to be found. Vanquished in a fight, but victorious in his battle against time.

Christ enthroned in the apse of Catalonian San Clemente de Tahull, painted in 1123: ”I am the light of the World” says the open book. Abstract expressionism, powerful aesthetics.

Thirteen years old I became fascinated by this dragon slayer from a manuscript painted in Dijon sometime in the 12th-century – St Gregory´s Moralia in Job. I copied it several times.

A farting goat from a Medieval manuscript, written and decorated in Prague. Is it a bored monk having some fun? Hussite irony? Prague as breeding ground for subversive humor?

In 1304, Giotto painted the kiss of Judas. The first time I saw the frescoes in Cappella degli Scrovegni in Padua was together with my father in 1965. A clear-cut, obviously anticipated field of tension between a mild, prepared and conscious Christ and a Judas who performs the tragic role expected from him. Their eyes meet. A pivotal moment in the history of art. A masterpeice created by a great artist and profound psychologist.

It was not so long ago I in Prague for the first time was confronted with the Třeboň Altarpiece from 1380. Angular and thorny in its dissonant, otherworldly, surreal and elegant craftmanship.

In the Grandes Heures de Rohan in Paris´s Bibliothèque Nationale, painted between 1418 and 1425, we find a dying man who does not lie at home  in his bed, but outstreched and helplessly exposed on a silk duvet placed in a cemetery. Old, naked and emaciated, he surrenders his soul to God while the Devil and the Archangel Michael are fighting over it above his head. God Father bows down, he holds a sword in his hand. Will the dying man be saved from Hell?

Paolo Uccello’s eerie and utterly strange depiction of the aftermath of the Deluge, painted in 1448. It may be admired in the so called Green Monastery of the Church of Santa Maria Novella in Florence. The fresco is  damaged and even if it was recently restored it is quite murky, even if seen in situ. However, that does not diminish its strange attraction, with the peculiar floating devices of the survivors, the gusts of wind that throw tree branches against the sides of the Ark (or is it really the Ark?). The contactlessness between people. What is actually happening in this piture?

Rain was pouring down when we in 2017 made a stop over in Monterchi to admire the Madonna del Parto that Piero della Francesca in 1455 painted in a chapel above his mother’s tomb. Two angels proudly presents a pregnant Madonna.

An Aztec woman giving birth sometime in the 15th century, here together with Xochipilli, god of beauty, dance and flowers. The human sacrificing and strangely beauty-loving Aztecs were apparently familiar with death, horror, pain and terror, while their artists knew how to express it all.

An usurpassed masterpice of expressionistic realism – The Depostion painted in 1440 by Rogier van der Weyden, now in the Prado Museum. The passion inside a box.

Some rustic shepherds pay homage to the newborn Jesus in Hugo van der Goes´s Portinari Altar in the Uffizi, painted in 1476 and brought by ship and over land from Bruges, where the wealthy Florentine banker Tomasso Portinari lived for forty years. Keen observance and empathy with the poor in the service of wealthy patrons.

Four years later, an equally skilled Tyrolean realist, Michael Pacher, painted an altar in Salzkammergut, just as sharp and original as anything done by van der Goes, but with an added grain of intensity and a weird, fanciful imagination. 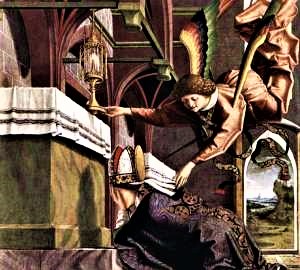 Most beautiful of them all – L´Annunciata de Palermo, painted 1475 by Antonella da Messina. You can sit for hours and admire her in Palazzao Abatellis, so far there is no throng of tourists like those in front of Mona Lisa in the Louvre. To meet this Madonna is such an intense experience that it in itself makes a trip to Palermo wothwhile.

And as a contrast – Jean Fouquet’s extremely odd, but nevertheless fascinating Madonna from the Melun Diptych painted twenty-five years earlier. Magnificent in all its absurdity.

The maid pouring wine in a glass is a captivating detail from Luca Signorelli’s fresco Two Benedictines breaking the fast in the church of Monte Olivieto Maggiore, painted in 1497. Signorelly was an early master in depicting the movement, volume, roundness and firmness of human bodies.

Lorenzo di Credo’s Venus from 1495. He studied together with Leonardo da Vinci under Andrea Verocchio and later became a fervent follower of Fra Savoranola. Had he seen his disciple’s Venus it had probably ended up on the fanatical monk´s Bonfire of Vanities.

Saint John the Baptist in deep thoughts, depicted by Geergten Tot Sint Jans sometime in the 1480s, he was a monk who died young.

I have now reached the 1500s, make a break and maybe I will in a future blog spot return to some of my other favourites and then follow the trail further on.

Giovanno Francesco Caroto´s Boy with a drawing of a puppet from 1523 is maybe not a flawless masterpiece, though it is a charming statement of an artist´s pride in his own work and the joy of showing works of art to others.